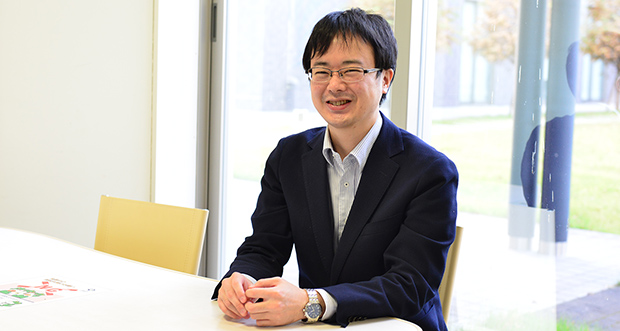 Please tell us about your research. 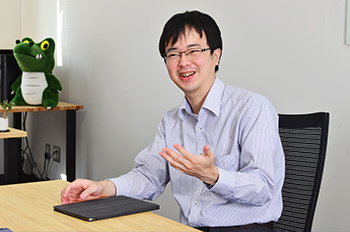 Integrated circuits that blend in with society can be imagined as recent edge devices and IoT. In order to operate a device that can be attached to a person's body, a wall, or an object, and can run on battery power for 10 years or so, a low-power device is absolutely necessary. Therefore, I am researching the design of such low-power integrated circuits that do not overly consume batteries. For example, I am trying to devise circuits to reduce energy consumption as much as possible, or to create circuits that work properly even when operated at lower voltages than originally expected, voltages that would normally never work.

At the root of this research is the fact that variations in circuit performance occur. Specifically, even if the same semiconductor device is made, a slight variation in performance will occur. Furthermore, the performance of semiconductor devices gradually deteriorates as they continue to be used. A computer is made up of billions of transistors, which are used as switches in circuits. If such unexpected variations and degradation accumulate in individual transistors, the circuit assembled with the transistors will not work as intended and will eventually fail. Furthermore, if even one transistor malfunctions, the entire system will fail. If the voltage is lowered in order to draw out the power, this variation is accentuated even more and the circuit stops working. 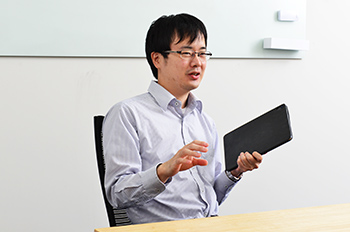 If we compare it to a human being, there are sometimes people who miss school classes because of a cold. This is unavoidable with humans, but with integrated circuits, even a single absence is unacceptable. There are billions of transistors, and they can't work properly unless everyone is there. It's a collective responsibility. The fact that billions of transistors all need to work for decades is quite a miracle in the first place.

Therefore, it is important to create a circuit that takes into account the fact that performance will vary and deteriorate. For example, I am researching technology to design circuits that work properly even if the billions of transistors vary or deteriorate. If this becomes possible, devices such as smartphones, which until now have had to run on large batteries, will be able to operate even with a very weak power source.

Could you tell us what made you decide to start research? 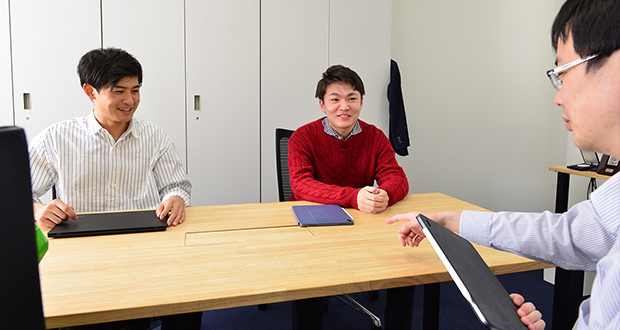 At that time, I had a lot of opportunities to interact with video games and computers, so I decided to go to an integrated circuit laboratory and joined the Onodera Laboratory, Graduate School of Informatics, Kyoto University. My research there was to design circuits with very low power, and I tried to create circuits with half or a third of the voltage used in normal circuits. From there, I continued my research on low-power circuits. Recently, I have had the opportunity to participate in research on modulating light for computation and controlling light on semiconductor chips. There, I am working on new computation computers. The main idea of this project is to create a computer that modulates light to perform calculations without leaking information to the outside world. For example, unlike the voltages and currents handled by conventional integrated circuits, light has the characteristics of a wave. If we create a safe computer using light by hiding logical information in physical quantities such as the amplitude and phase of the waves, which cannot be expressed by conventional electric-based integrated circuits, the information will not leak out. I am involved in such a project.

Low-power devices and secure computers are research themes that have only recently begun to be brought into connection. A good example of this is the IoT. The IoT is used to measure people's heartbeats, control automobiles, etc. Therefore, the IoT needs to be housed in low-power and secure devices. So, recently, research is being done to connect the two.

My impression before I moved here was that it was an amazing group of people who were involved in many famous research projects. Although famous, the research is carried out quietly and with no advertisement - that's what kind of university I thought it was. 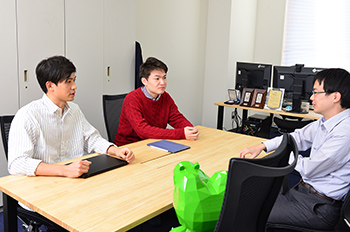 In terms of research, I had the image that a lot of software and application research was being done. I had been doing hardware-based research, such as low-power integrated circuit design and security. Therefore, I decided to enter the Graduate School of Information Sciences, thinking that I would be able to create a new interdisciplinary research perspective if I went to such a place.

When you are working on a single research project, you may get stuck or have no clue how to solve the problem. How do you deal with that? 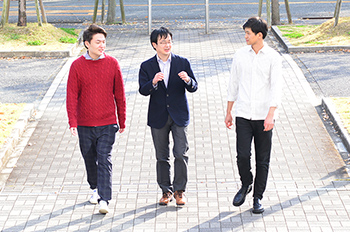 When no amount of thinking helps, I forget about it for a while. Then, when I read a paper on a completely different project, I may happen to find a solution to the problem that I had put away, and think "Oh!" If I find it, I can incorporate it directly into my research, so I often leave it to chance.

I'm not sure I can give good advice, but I think it would be good to put up antennas in various places and think where else things can be used while doing something completely different - to look at things from an interdisciplinary perspective. I love thinking about one problem all the time by myself, but I tend to be biased in my questioning, and it's hard to come up with new solutions. I sometimes encounter new things when I listen to people in different fields, even while wondering what the point of all that is. I think that is good for research.

I think it is important to make new encounters by yourself. Recently, I bought pork bones, a noodle-making machine, and a pot by mail order, and made ramen from scratch. This is a project where I cook my own soup, make my own noodles, and make my own ramen at home. I've done it three times so far, and it's interesting because you can make it even at home. It's a lot of work, but you can make the noodles and soup in three to four hours. It is hard work to knead and make noodles by yourself, but as you work mindlessly, you may make new discoveries.

Students often worry about what to do after they get their PhD. When did you start thinking about staying in academia?

I had a vague idea of becoming a doctor from the time I entered university, but I only had the vision of getting a doctorate. I did research as my interest led me, and before I knew it, I was doing my current job. If you stay in academia after graduation, however, you will have students with you, and you will be involved in supervising them and managing the university. I felt that I would have to spend more time thinking about things other than myself, and that I would have less time for myself.

I graduated early, but after I graduated, I thought back on the precious time I had to do nothing but research. I think it is very good to spend three years in freedom while thinking a lot. 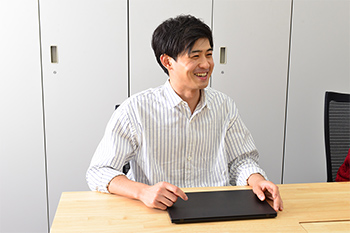 W When I was a master's student, I had to attend classes and also hunt for a job. I felt that I spent much more time on things other than research. When you go to a doctoral program, you can focus only on your research until about the second year, so I sometimes think it is easy.

It's not really about research, but I am the oldest person in my lab now. Until my master's degree, I didn't have to think much about running the lab or taking care of the younger students, but now that I'm in the doctoral program, I feel that I have more responsibilities such as taking care of the younger students, watching over the group research, and making sure that our daily life is going smoothly.
Recently, there are more and more people who can't casually ask for advice about their research, so I make individual meetings every week to make time for chatting even for 30 minutes. M When I consulted with people about my research, they often recommended that I go to conference presentations. When I actually attended a conference, I was happy that I could talk quite a bit, and I enjoyed telling other researchers about what I was doing. It was fun because I felt like I was being recognized as having done great research.

Do you have a message for students who are planning to enroll in the graduate course? All of the professors at the Graduate School of Information Science and Technology are doing cutting-edge research. If you can enjoy your research to the fullest while feeling that you are at the forefront of the world, I think you will be able to enjoy your days at the Graduate School. I discipline myself in this way as well. The professors expect outrageous statements, so the more outrageous your statements are, the more they will say, "Oh, that's interesting, let's research it." Think about your research every day, and enjoy the feeling of being at the forefront of the world with your newly acquired knowledge. Also, many of the professors at the university are hungry for chit-chat, so if you talk to them in a light-hearted manner, many of them will join in. Please feel free to communicate with both teachers and your juniors. 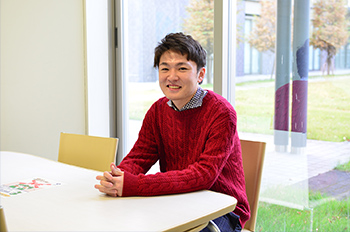 M When I don't understand something or I'm stuck in my research so I consult with professors about my concerns, there are many professors who immediately give me advice, summarize what I don't understand with me, and then come up with a solution or a place to start. In terms of studying and research, they will follow you closely from the time you don't know anything in the field to the time you acquire the latest knowledge to be able to do research. They teach you how to do research, so even though I didn't know anything about it, I think I was able to take the first step as a researcher after I joined. 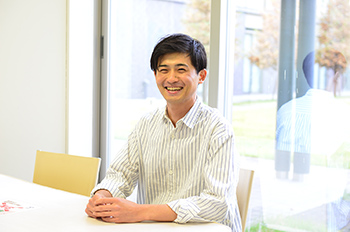 W Many of the professors are friendly and easy to talk to. I think that research is sometimes born from ordinary chit-chat. At this school, a project may suddenly come to mind from chit-chat about how it would be nice to have such-and-such a society. It has that improvised feeling to it. Many of the professors at the Graduate School of Information Science and Technology love new things and are always on the lookout for them. I think I started to discover more interesting things when I talk to my teachers. I hope that you will come to the Graduate School to enjoy such chats and conversations as well.

*Masks were removed only during filming.